Hi, it's me Yash Soni, a karuta enthusiast. This post is meant for memorisation technique which proves to be very effective in memorising the position of cards.

So, karuta is based primarily on your hearing and reflexes but you cannot just target a random place when the card is read aloud (neither do you have time to find the cards). You are supposed to memorise the position of 50 cards and also remember how to approach each and every card. Well, the technique I'm about to tell uses this mnemonic for going the cards on the field.

Ha Ya Yo Ka

Each card represents the family of cards that a particular card may belong to. This representation has a meaning in a row-wise arrangement. Each row member is associated with it's neighbouring same row member in a way. I want you to figure this out and tell me down in the comments below.

There are few points always to remember:

One, always be thorough of your opponents cards position.

Three, always memorise a card imagining yourselves swinging your hand to take the card (Yes! Imagination helps a lot!)

As you play you will get a fixed kind of card placement (which can be improved at timely intervals by changing the fixed positions of certain cards), so you need to focus more on what you have across the line to attack.

First syllable cards are easier to take so, it's kind of obvious to take them in note.

Imagining actually helped me improved the way I take a card, so just it's a piece of personal advice

Once time starts, start from the lower right to the upper left of opponents field and scan the cards present in zigzag fashion (actually any order may do but try being deterministic and follow the same order every time)

Now, only recall the positions of the cards as if the cards are being in the mnemonic order given above. Mu stands for murasame no itself and U for both Uka and Ura, similarly A stands for all 16 cards starting from A like Akino, Akika (I know that's too much for 'A' but beware of those cards, you really have to be careful in the endgame because you cannot tell whether the card has turned into a 1 syllable or not)

Repeat this again for the second time for your opponent's territory a little faster this time.

Next time, include your cards too.

Until now you have gone through the field thrice, but that is not sufficient. Go for another two rounds sitting the position that you are making a swing looking at a fixed location like the middle of the lower row of your opponent (do not make practice swing before 13 minutes).

When 13 minutes are over practice swings in the same order. This helps to firm your memory. During this time also think of the first three cards that you will send as Okuri Fuda.

Whenever you get time in between two poems revise the positions and keep track of the changing kimariji.

And the last thing, though memorising time is just 15 minutes, but you can keep memorising until the game is over.

Answer to the previous question I asked in a former post

Ok guys, remember that I asked you a question in the part two of the rules.

The question was if both the players committed fault, would there be a exchange of cards?
Well, the answer is no. No, there won't be any exchange of cards. Although, both committed a fault we don't even think of cards being exchanged between the territories.

Next post will be on how to learn the cards or how to place them.

Hi, everyone!
I am back with a karuta video to show how a Karuta game works.
The link to my YouTube video is below:
Click here.

Ok, guys I hope that I didn't make you wait too long. Here's the further information on the rules of Kyougi Karuta. Today, I'll tell you about the otetsuki (also known as 'foul touch' or just 'foul').

To make my platform of teaching more interesting I have decided to teach you in collaborations of some case studies. 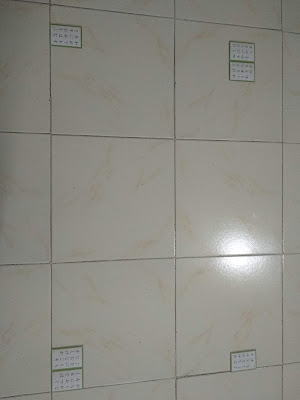 "> So, her's a case where the cards on the field have come down to 3 vs. 3 with cards like 'chiha' and 'ura' on my right corner and the 'su' card in the left corner. On opponent side we have 'mu' and 'uka'(a friend card or tomofuda of 'ura' card, one which is on my side) topmost left corner of the image and 'se' on the topmost right corner of the image. So, here are different cases of Otetsuki( now onwards foul touch is referred as otetsuki, it's painful to type so much :'D):

What if both the players end up committing fault? Is there any possibility of card exchange?

The Queen who is the benchmark of the Chiihayafuru character is M/s. Kusunoki Saki. She is the youngest queen in Karuta history and probably the only one who hasn't lost single Queen Rank Title Finals held at Omi Shrine, Shiga Prefecture.

Ok, now we start on the rules of Kyougi Karuta.

1.The game is played on tatami mat(If Judo mat can be made available it can do). You can also use tile floor but make sure that you have knee support. Don't hurt your knees. 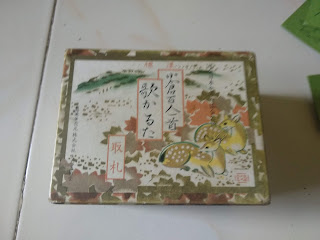 
2.The set of cards used is Ogura Hyakunin Isshu made by Oishi Tengudo. The players sit facing each other, bow to each other and shuffle cards in between them facing upside down. 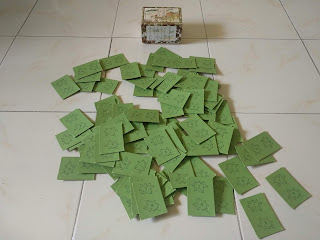 3. Pick some cards from the shuffled cards and pick only 25 cards. I have no one to play with me so I select the cards for both sides. Playing alone is known as hitori renshu.(You can do that by making 5 decks of 5 cards each.) 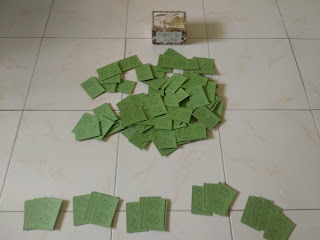 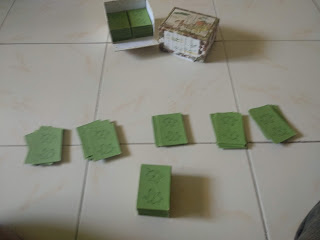 (50 cards are used in one game and are also known as de-fuda. Rest are known as Kara-fuda or empty cards or ghost cards)

4. Now, we place the 25 cards in the place between the players in the length approximately equal to 87 centimeters or length equal to row when 16 cards are laid side by side and the breadth equal to 3 rows of cards with space of 1cm each between the rows. The opponents area also known as territory is separated from yours by 3 cm and the complete area makes the Kyougi sen(or field of play). The choice of place for each card is kind of a characteristic of a Karuta player. Now, here's a image of my arrangement (down) and opponents (up). I generally shuffle and lay cards for my oppositfe field. 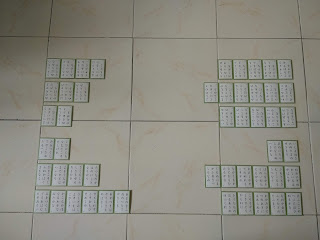 5. You now get 15 minutes to memorize the placement of cards. In the last two minutes you can practice swings imitating taking a card but you are not suosupp to touch them.

The game proceeds......
7. You bow to your opponent and to the receiver and the game begins.
You must say Yoroshiku Onegaishimasu(Wishing good game to you) while bowing.

8. The reciter reads the poem Naniwazuni as the opening poem.

9. One who touches the card first gets the card. The motive is to reduce oneself's count of territory to 0. The player who succeeds is declared as the winner. 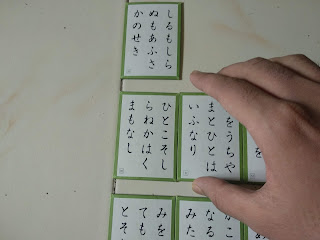 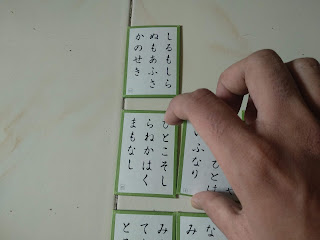 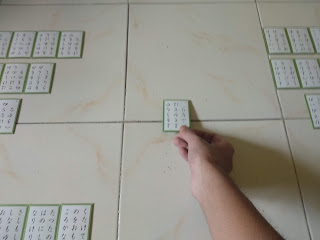 (You just have to place a card in the middle of the top row.)

Ok, one good rule of the Karuta is that you can push the card you want out while knocking the ones surrounding it to, but you have to place them back in same order(except the one which was read). However, this rule has a exception which is to be discussed later.

Continuing this, the cards on the field keep dwindling and the number of cards left on the losing side can be considered as a score. However, losing with one card or losing with 25 makes no difference.

Fun fact: The queen whose image is been idealised by the character Wakamiya Shinobu never lost a game to a Challenger in finals of Queen title. She holds the record of 10 straight titles and 20 victories.

Hi everyone!
This is Yash Soni. A undergraduate student who got to know about Competitive Karuta while in senior grade school. I have been practicing on my own since five years. I got to know about Karuta from the anime Chihayafuru. I have decided to shsrs my knowledge of Karuta to help you become a good player.
As in my case, I haven't participated in any of the Karuta tournaments but I will be glad if someone used my knowledge as resource to compete if he visits some tournament.
The next post is going to be about basics of the game.
Posted by yash soni at 18:52 2 comments: